Future Fragments is a hybrid platformer Run ‘N Gun RPG game with a science fiction/mystery theme. In this demo, you can choose your own path through the level. In the full game, there will be 5 levels, each with its own set of enemies and environments; this Electric Level demo has a robotic theme throughout. 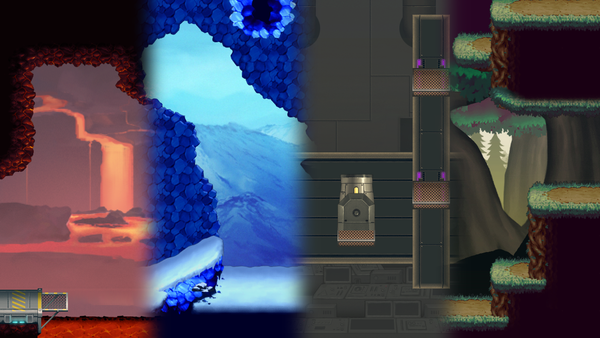 The game starts off in the year 1000 AD, where your King, a powerful sorcerer, has been having trouble keeping your kingdom protected from those who would try and harm it.

He’s attempted to train multiple promising citizens into mages to help defend the kingdom, but unfortunately only two of them had enough talent to become true magicians; Talia (that’s you!), an 21-year old, serious, “by the book” long-range specialist and Faye, a 22-year old, acerbic, arrogant short-range specialist.

All seemed lost as the kingdom was slowly losing ground, but then your King stumbled on a miracle solution. Using his powers to rip a portal open to the future, he was able to find a powerful weapon, sitting disassembled in fragments, in the year 3000 AD.

Thus, your King’s orders are simple and direct; find the Fragments and return home safely. Additionally, whoever brings back the most pieces will be designated the King’s right-hand woman, with all the power that that brings. Unfortunately for the King though, the two women each have their own motives…

And of course, there are threats in the future, too. Mainly, there’s the World Organization for Regulation of the Masses, abbreviated “affectionately” as the WORM by the few remaining rebels who fight against it. Even worse is that sex and relationships, being seen as a waste of time that could be spent working, are both outlawed by the WORM (people are created through cloning and other means).

This means that quite a few people are very, VERY desperate for sex in the future… and on top of all that, if you want to survive, you’ll need to figure out the truth behind the Future Fragments.

Excited about this upcoming release? Find out more on the Future Fragments Patreon page and support the game’s development! Here’s a preview of what you can look forward to in the full game: